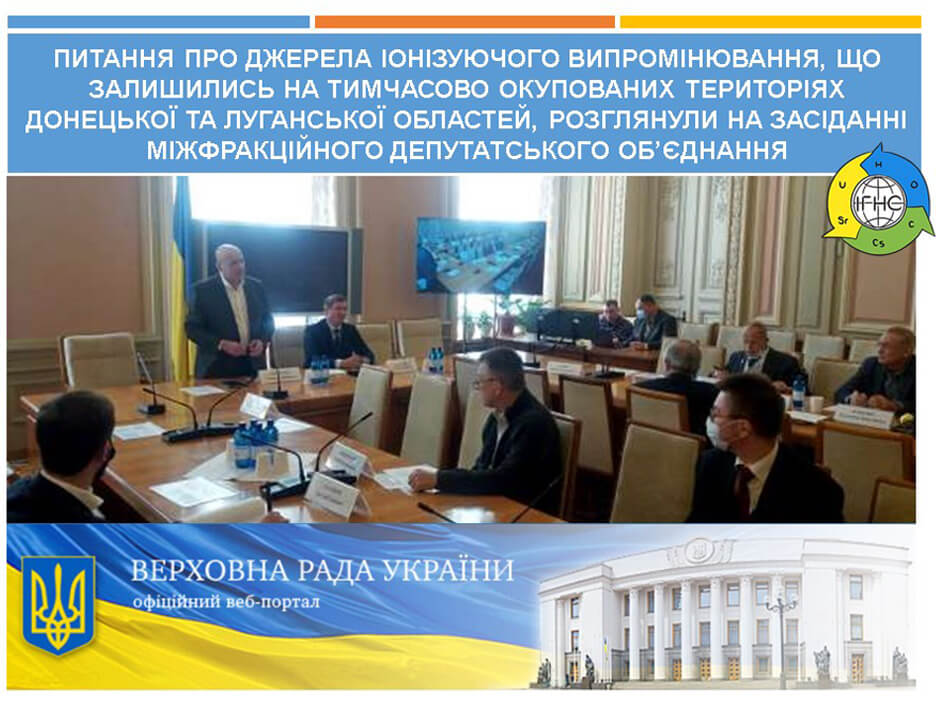 Inter-factional deputy association “For technogenic and ecological safety in the fuel and energy complex, railway and pipeline transport of Ukraine” together with the National Commission for Radiation Protection of Ukraine held a meeting to consider: “On the number and activity of ionizing radiation sources remaining on temporarily occupied territories of Donetsk and Luhansk regions “.

The head of the National Commission for Radiation Protection of Ukraine, MP Oleksandr Kopylenko, noted that the Commission considered the issue in July last year and sent recommendations to the Cabinet of Ministers, “but, in our opinion, the situation is not only unresolved, but somewhat worse.”

The presence of a large number of issues related to the environmental situation in the occupied territories, said the Chairman of the MFI “For man-made and environmental safety in the fuel and energy sector, railway and pipeline transport of Ukraine,” MP Sergei Shakhov.

In particular, he focused on the problem caused by the cessation of pumping water from mines in the temporarily occupied territories of Donetsk and Luhansk regions. “We are forced to double the volume of water pumping, because it comes from the temporarily occupied territories. This means that there is no pumping at all, and this is alkaline water, water from the Yunkom mine, where a test nuclear explosion was carried out in 1979, “said Serhiy Shakhov, adding that this water, entering groundwater and rivers, “May pose a threat to the flora, fauna of the region and, in general, man-made safety and human health.”

Member of the National Commission for Radiation Protection, Deputy Director of the State Institution “Institute of Environmental Geochemistry of the National Academy of Sciences of Ukraine” Victor Dolin presented a report “On the number and activity of ionizing radiation sources remaining in the temporarily occupied territories of Donetsk and Luhansk regions “.

Victor Dolin said he thought the problem was much broader. The main risk factor in these areas is rhodon, which is a natural but the most critical risk, as it is extremely exacerbated by man-made risk – rising water in the mines due to the cessation of pumping. 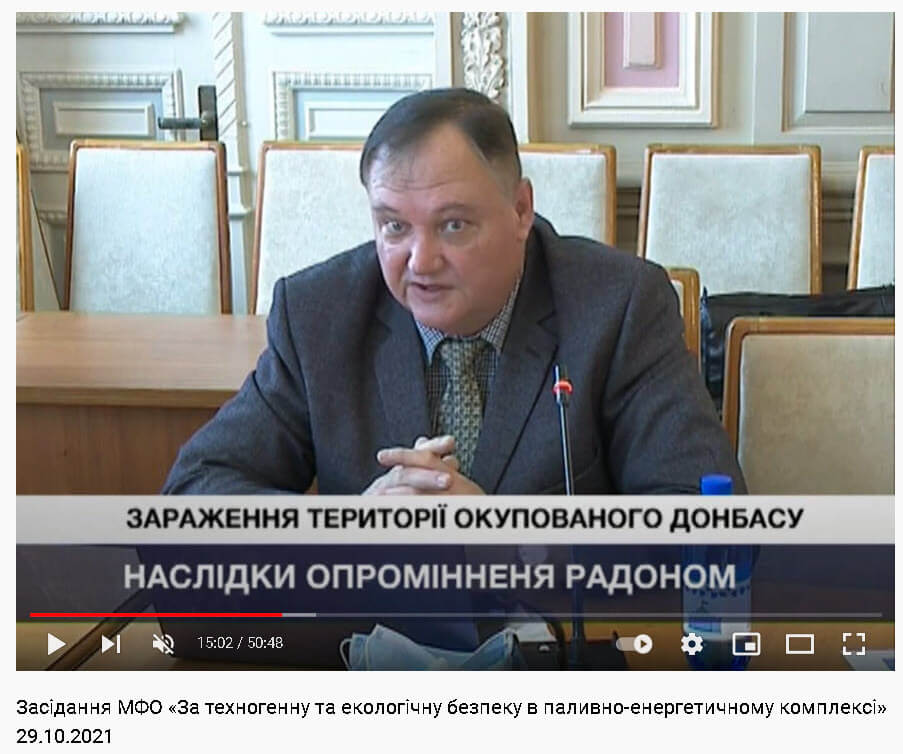 Among the less significant radiation risk factors, the scientist named (in descending order of impact):

Member of the National Commission for Radiation Protection, stressed the growing radioecological and terrorist threats in eastern Ukraine, which is determined by the loss of control over sources of ionizing radiation of natural and man-made origin in uncontrolled areas.

The member of the mission of the International Committee of the Red Cross in eastern Ukraine Yevhen Yakovlev, speaking in a joint report, stressed that 80% of mines are located in the temporarily occupied territories of Donbass and a third of them are now flooded. “The regional rise of the groundwater level and the rise of its level above the upper mountain horizons” stitches “the territory of the whole Donbass, controlled and uncontrolled, into a single, unstable, dangerous eco-man-made system,” he said.

The scientists provided their recommendations, which, in particular, concerned the involvement of international organizations in solving the problem, improving the radiation monitoring system.

Representatives of the Committee on Environmental Policy and Nature Management, the Ministry of Environmental Protection and Natural Resources, the State Inspectorate for Nuclear Regulation of Ukraine, and scientists took part in the discussion.

Speakers briefed on measures taken to address the situation, including within the Tripartite Contact Group and at the international level.

Emphasis was placed on the need to: obtain information from the temporarily occupied territories on the condition of potentially dangerous objects; ensuring control over the movement of radioactive objects, in particular, when crossing the demarcation line; involvement of international organizations; informing the population and using the experience of liquidation of the Chernobyl accident.

Following the meeting, the relevant recommendations of the Cabinet of Ministers and the Office of the President of Ukraine will be developed. In addition, it was proposed to present a report on this issue at a meeting of the National Academy of Sciences and more actively involve public activists involved in environmental issues of Donbass.

The participants also heard information on the results of a new Global Survey of the UN Scientific Committee on Atomic Radiation (UNSCEAR) on human exposure for the period 2007-2020, presented by the National Contact Point for the new UNSCRE Global Survey on Irradiation, IAEA expert and WHO Vadim Chumak. (According to the website of the Verkhovna Rada of Ukraine https://iportal.rada.gov.ua/news/Novyny/215595.html ). 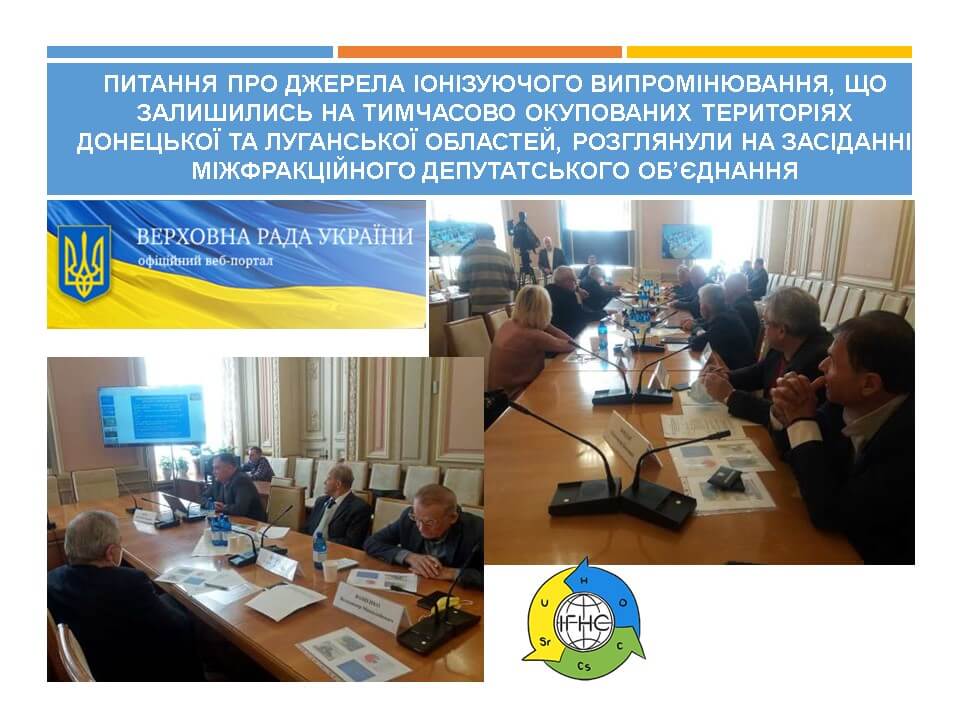